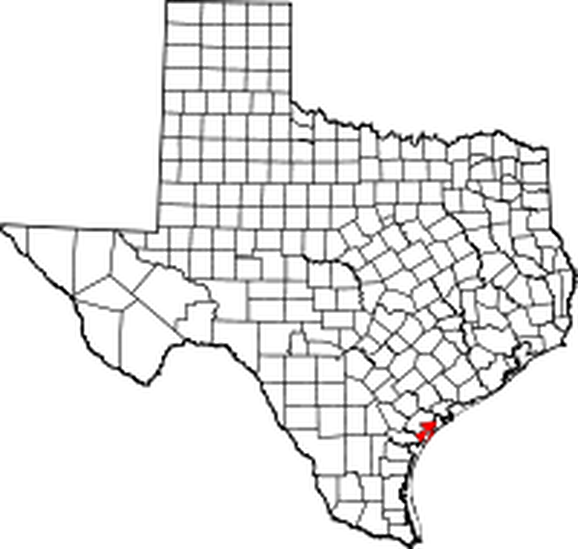 Named for the Rio Nuestra Senora de Aranzazu a Spanish outpost. The county seat is Rockport. It is located on the Gulf of Mexico. It is difficult for me to know where to start when talking about Aransas County, we have stayed in Rockport many times over the years, starting in 2006.  I have lots of wonderful memories from trips to this coastal town. We were very sad when Hurricane Harvey caused so much devastation to this part of Texas. Steve has kept an eye out to make sure Charlotte Plummer's  has been recovering, as we always pay this restaurant a visit, Steve is particularly partial to the gumbo there and I love that it is right on the water and has harbor views. We also try and visit a restaurant that is new to us last time it Old Fulton Seafood Cafe & Deli which we loved for lunch and will certainly pay a return visit (if it does reopen). We also ate at  LATITUDE 28°02'  which I don't remember being bad but I also can't recall what we ate (nor can Steve) so that tells me, despite being reasonably pricey it was not outstanding and  we won't go back. We also use these trips to stock up on fresh shrimp (they are still prawns to me for any fellow Aussies reading) which we get from Flowers Shrimp Market  (also known for their egg rolls).
Okay on to the markers. It's pretty simple they are all accessible and  all there, EXCEPT for one, Aransas Pass Light Station which is on a private island. The marker is there and it may be possible to capture it on boat tour but I have yet to attempt this. As I write this I realize this may not still be true some of the markers or beautiful old houses may not have survived I hope this is not the case. When I think how much damage Aransas County received and all the destruction I can't help but think about my brother and his family who live in a very similar type coastal town in Australia, both areas are largely comprised of working-class families and I know how hard it would be for him to bounce back from this type of disaster. This area also derives income from tourism which I'm sure has been affected by recent events it reminds me that we should plan a return visit soon.
29th November, 2018​ - On reviewing Aransas County, I was surprised to see even one new marker on the list, considering what they have had to deal with. I'm not sure this marker is actual up yet but the planning alone is impressive and it for a beautiful old home that is most certainly deserving.
16th September, 2019 - This was our first time back since Hurricane Harvey and I was pleased to see it was all coming back nicely. We again have one last lonely marker, the Aransas Pass Light Station, next visit we are doing the boat trip required to finally complete this county. Ahhh after writing I realize there is one more I need Lamar Volunteer Fire Department, not sure it is actually up yet.
29th August, 2020 - We have visited a couple of times recently because we will be moving to this part of the state all be not Aransas County (yet, but you never know). We did capture the Lamar Volunteer Fire Department but I realized on review that Fulton Volunteer Fire Department has also recieved a marker so this one is stilled needed. The Lamar Cemetery recieved a replacement marker, the "The" was dropped from the title so I would likr to ass it to the Lamar Cemetery entry. The Lighthouse marker is still needed.
11th March, 2021 - Well we are living in Portland which os about a half an from Rockport, so no more excuses for not doing a boat trip to the Lydia Ann Lighthouse. Other than this the county is complete. We do have a new favorite Rockport restaurant, it's called 495 Chesapeake Eats its seafood  and yummy with a seasonable menu, Steve said the blackeyed peas and cabbage which the best he had ever had and he wasn't even a hugh blackeyed peas fan.
Aransas County
Aransas County
Aransas County Airport
Aransas Pass Light Station
Balwin Brundrett House
Baylor-Norvell House
Bracht House
Casterline Fish Company
Cementerio San Antonio de Padua
Connie Hagar
First Baptist Church of Rockport
First Methodist Church of Rockport
First National Bank of Rockport
First Presbyterian Church of Rockport
Frandolig Island
Fulton
Fulton-Bruhl House
Fulton Cemetery
Fulton Community Church
Fulton Mansion
Fulton Volunteer Fire Department
Home of George W. Fulton
Hoopes-Smith House
Hynes-Balthrope House
Jackson Family Maritime Companies
Joe A. and Bertha Harper House
John Fagan
Lamar Cemetery
Lamar Volunteer Fire Department
Mathis House
McLester Family Cemetery
Mills Wharf
Moore House
Port Bay Hunting and Fishing Club
Richard Henry Wood House
Rockport
Rockport Air Force Station
Rockport Cemetery
Rockport Marine Laboratory
Rockport School
Rockport Volunteer Fire Department
Sacred Heart Catholic Church
Site of Aransas Hotel
Site of Heldenfels Shipyard
Site of Marion Packing Co.
Site of One of the Homes of James Power
Site of Town of Lamar
Smith-Brundrett House
Sorenson-Stair Building
Stella Maris Chapel
St. Peter's Episcopal Church
The Cedars
The Lamar Cemetery
The Rockport Pilot
The San Antonio and Aransas Pass Railroad in Rockport
Woman's Club of Aransas County Building
Wood-Jackson House