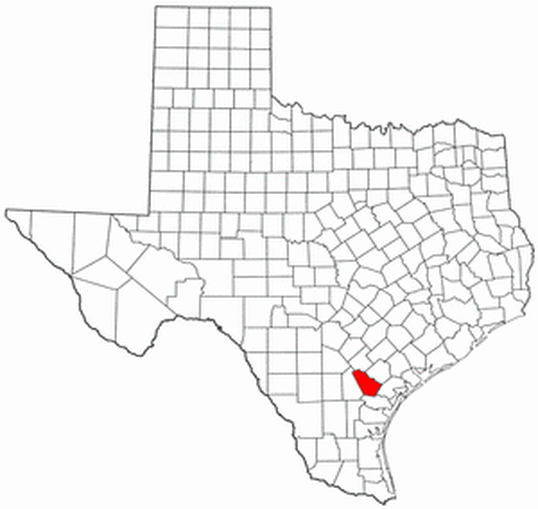 Named for Barnard E. Bee, a secretary of state of the Republic of Texas. Beeville is the county seat. We have not visited Beeville since 2006 and there have been a lot of new markers installed since then. In my head our Bee County markers are a mess and I was reviewing the county, and I was wondering why I felt that, I think its because in 2006 we were not as organized, I didn't research  the markers prior to the visit, so that trip felt messy. The Bee Courthouse was under going restoration and the marker for it was not in place, two the houses the A. C. Jones and Camp-Ezell were missing their markers and until recently we weren't even sure the house we thought was the Camp-Ezell was really the Camp-Ezell house. The Medio Creek marker was snapped of at its base. Most of  the photos are not what I want them to be and really need to be redone. I have written to Bee County Historical Commission in the hope getting some answers so our next trip to this county can showcase this counties' historical markers and landmarks in the manner they deserve.
4th December, 2018 - On reviewing Bee County, I still feel the way I did a year ago when I wrote the above entry. My photos are not what I want them to be. Camp-Ezell House and A.C. Jones house are still missing their medallion & plates which irritates me. There are new markers that are in storage like Rialto Theater that has  yet to be installed even though it was slated for 2007 and Benjamin Dudley Tarlton Dougherty who's daughter had house renovations to complete prior to dedicating her dad's marker. There are old houses like the Rountree Rock House and Jim Little Homestead that are on private property that I'm not sure we will be able to capture them and of course the missing Medio Creek Bridge marker. All in all Bee County messes with my sense of order, I also have a strong drive to want to complete counties (especially smaller ones) which I know maynot be possible here. Kay Mix Bee County Chairperson has been very helpful in answering all my questions in the past and I have written to her for an update before we make another trip. I want to feel better about our Bee County set and I really think only a few more days in this area will help with this.
28th April, 2021 -  We visited recently but only to swoop in and pick a single marker. None of the riddles of Bee County have been solved. We will try and revisit in the near future.
7th December, 2021 - We have Bee County in better shape and I feel like. I at least have a better relationship with what is left in this county, Steve just says its done 🙄.  This what left the Benjamin Dudley Tarlon Dougherty marker may or may not be on the San Domingo Ranch it is certainly not on the side of Hwy 181. The A. C. Jones Home we have heard the marker is inside the house. The Camp Ezell House is also missing it's  medallion & plate., Jim Little Homestead is on private property and thats about we know. Medio Creek Breek marker has been missing for many years. The plate for the Bee County marker has also been missing for many years too.The Roundtree Rock House is also on private property so I'm not sure about the marker. The Colony Cemetery marker is missing. Camp Santo marker is on private property I'm just not sure it is accessible.
A.C. Jones Home
American Legion Post 818
Aransas Creek Settlers
Barnard Elliot Bee
​Bee County
Bee County Courthouse
​Beeville Bee-Picayune
Beeville on the Poesta
Beeville Post Office
Benjamin Dudley Tarlon Dougherty
Bethehem Missionary Baptist Church
Blanconia (Old N2) Church
Blue Star Memorial Highway
Cadiz Baptist Church
Camp-Ezell House
Camp Santo
Captain A. C. Jones
Colony Cemetery
Commercial National Bank
Community of Normanna
Cook Home
Early Trails in Bee County
Evergreen Cemetery
First Baptist Church if Beeville
First Christian Church
First Methodist Church of Beeville
First National Bank of Beeville
First Presbyterian Church of Beeville
Gentry Dugat
George Home
Glenwood Cemetery
James Lincoln de la Mothe Borglum
Jim Little Homestead
Jones Chapel United Methodist Church
Lott Canada School
McClanahan House
Medio Creek
Medio Creek Bridge
Papalote Creek
Park Hotel
Praeger Building
Rialto Theater
Roundtree Rock House
Saint Joseph's Catholic Church
Saint Phillip's Episcopal Church
St. Joseph Cemetery
St. Rose Cemetery
The Railroad in Bee County
Thompson Building (First Brick Building on Square)
Town of Pettus
Tuleta
West Side School for Mexican Americans
William E. Madderra Home