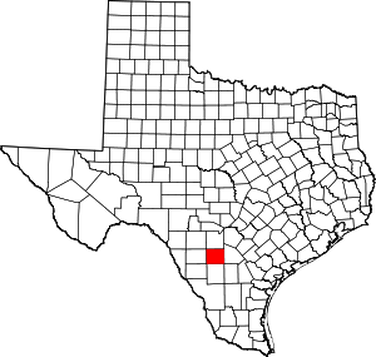 20th December, 2019 -  Named for the Frio River. The county seat is Pearsall.
We came through Frio Town at the end of a bigger trip we did not get to Pearsall at all. As far as impressions go, I don't have many but I  can say that the Frio is Spanish for cold and every time I have dipped my toes in the Frio River it is indeed cold. All the markers for this county appear to be in place. A couple of centennials are on private property and could require more time and permission  to access. The Bigfoot Museum does not have its own marker but as it is listed in the Texas Historical Commission Atlas I left it on the list below. This is not uncommon and the atlas has many other musuems listed as having markers but they are actually just places of interest rather than historical sites in their own right.
21st January, 2023 - We took a little road trip to clean up this part of Texas, we had not vistied in many years and had never vistied Pearsall. We are missing Frio Town and A Texas Ranger Camp which are both centennials on private property which we would still like to capture. James Washington has a Centennial which we have but apparently also has a grave marker which we missing, The Old San Anyonio Road is on private property and the location is unknown.
A Texas Ranger Camp
Bigfoot Wallace Museum
Brummett Cemetery
Brummett Cemetery
Frio County
Frio County
Frio Lodge No. 399, A. F. & A.M.
Frio Town
Frio Town Cemetery
James Washington Winters
James Washingtone Winters
Moore Catholic Cemetery
Moore Cemetery
Old Frio County Jail
Old San Antonio Road
Pearsall Presbyerian Church
Tehuacana Cemetery
William Alexander A. Wallace
William Carvin Winters