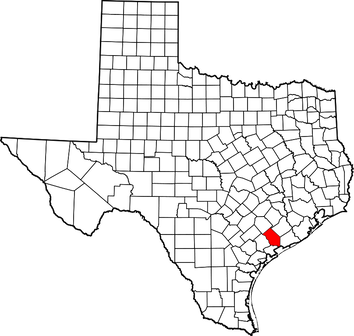 Named for Andrew Jackson a United States president. The county seat is Edna.
We hadn't moved to Portland in San Patricio County for long and Steve said we have to close this bank account there are no branches down here. Both of our names were on it and the closest branch was in Edna. He said well take the camera we haven't been to Edna before. Well, in my mind Edna was in Victoria County so when I investigated the markers in Edna there were none, because Edna is in Jackson County not Victoria. Starting a new job and moving must of thrown me off my game. So we get to Edna and of course there are markers but I had not researched so we freestyled and when we freestyle it is simply not as organized as when we plan, go figure.
The next trip, we planned just a quick overnight weekend getaway. This was probably the most frustrating marker hunting day we had ever experienced, there were so many on private property that we just could not assess, saying that, it was still relaxing driving around this rural county. Hopefully next adventure in Jackson County we can make some contacts and capture some more of this counties markers.
Bennett and West Ranch
Billups-Stell Home
Brackenridge Cemetery
Branch and Bonnot House
Confederates of Jackson County
Dr. Bronaugh-Hasdorff Home
Dutart-McDowell Home
Early Jackson County
Edna Mexican School
Elijah Stapp
Enon Cemetery
The Famous Lavaca-Navidad Meeting of 1835
First United Methodist Church of Ganado
Francis Menefee White
Francitas
Ganado
George F. Horton Home
George Washington Carver School
Hernandez v. State of Texas
Jackson County
Jackson County
Jackson County, C. S. A.
John Sutherland Menefee
​La Bauve-Young-Payne Home
Little School of the 400
Macaroni Station
Major James Kerr
Meriwether-Simons-Farquhar House
Mission Nuestra Señora del Espiritu Santo de Zuñiga
Old J. C. Traylor Place
Old Morales Store
Samuel C. A. Rogers
Site of Camp Independence
Site of The Johnston-Huston Duel
Site of the Old Town of Texana
Texana Presbyterian Church
Ward-Coates Home
William Millican's Gin House
W. P. Laughter Cemetery