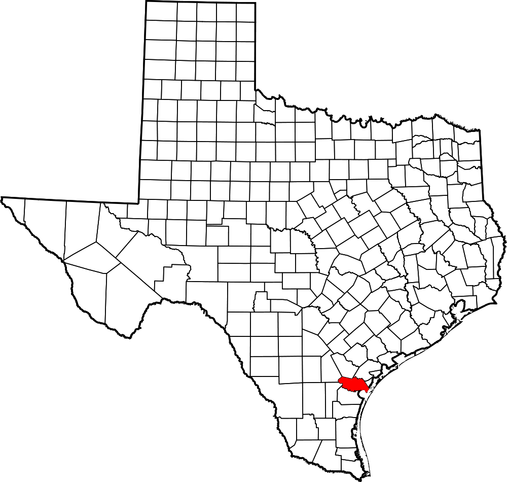 The county is named for Saint Patrick, San Patricio translating to Saint Patrick in Spanish. County seat is Sinton. We started traveling to San Patricio County back in 2006 and have been working on capturing the older markers ever since. This is a rural county with its economy tied to cattle raising and farming. There are 7 primary towns within San Patricio and each has a least one to two markers so they they feel like they are spread far and wide when you go looking.
The markers for Angelita (Little Angel) and Sharpsburg and Borden's Ferry fell victim to traffic accidents many years ago. There was intent to repair and reinstate them. I'm unsure that this actually happened. The thing that has caused this county to be somewhat difficult is that the Texas Historical Commission Atlas did not have them all listed back when we started looking and we almost tripped over most of the markers more by luck than design, they are now all listed but we still need to get a couple of them. I would love a better picture of the McGloin house which has a centennial and medallion but we just haven't timed that visit quite right yet. We have looked for but not located  the Joseph F. Green and La Quita Mansion marker and I have written to the San Patricio Historical Commission to see if it is actually up. The Texas Historic Commission also lists Bethel Baptist Church of Christ but I believe this is a duplicate entry for Bethel Baptist Church of Christ and Cemetery.
​23rd January, 2021 - This is now the county we are living in, due to me accepting the director position for two free-standing emergency departments in the area. As I sit here and think about what to say about this county from the perspective of an Inhabitat, I have mixed feelings, we are renting at the moment and don't quite fit into this house as it is considerably smaller than our house in Round Rock, so I think that makes me feel a little unsettled. There are some pretty parts of the county and it is nice being so close to the ocean, the traffic is so much better and the people have been welcoming. Will this be our long term home? Maybe is the best answer I have right now,
As far as the markers go, the Sharpsburg and Borden's Ferry and Angelita markers are still missing. The Joseph Green marker is up and I hope to capture that in the next few days. I have made inquires about visiting the McGloin Home, as we are now  close enough to  make an appointment to visit. I'm going to add the Jefferson Highway marker while it is still there, these marker have become somewhat political and are gradually being removed in some parts of Texas. Rosita Cemetery is new and on private property so I'll put out some feelers about access.