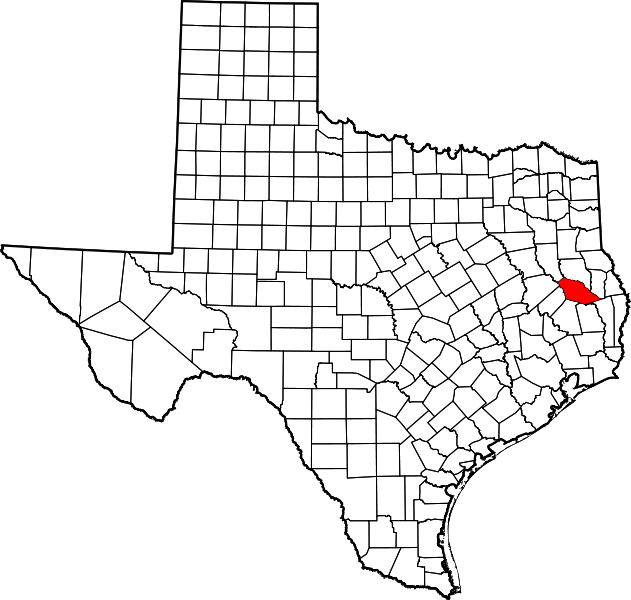 Named for a Hasinal Indian women who helped the Spanish missionaries, they called her Angelica and thus the county also adopted the name. Lufkin is the county seat and for this trip, was also our base camp.
No different than any of our other East Texas adventures it rained on and off, but I do like the smell of the pine forests after the rain and over all, this was a largely successful marker trip for this county. I do have to say this region of Texas has it's own unique feel, people are not quite as friendly or maybe is just more reserved. We ate in the Hole in one Cafe one night, the food and drinks were good, the service was fine but I felt I needed to  remind the waitress she was working for tips because I don't believe we saw her smile once. I talked to a friend from East Texas about this and she confirmed this impression to be largely accurate until people get to know you or you have lived there all your life.
The Angelica Historical Commission has been helpful answering my questions, many thanks to Bill Royce, the chairman for taking the time to respond. I was warned by a resident not to stray too far from the road by myself, she informed me she always carried a gun when looking for some of the smaller cemeteries even when she had permission to be on the property because you never know when you may walk up on an illegal still or some other activity that the person would rather keep private.
We confirmed that the Clark's Ferry and Clark's Ferry Cemetery marker was missing (I read it fell victim to vandals), Don Joaquin Crossing on Bedias Trail was also gone. I have again written to the AHC to see if the have any plans to replace these markers. We didn't locate Southern Pine Lumber Company Commissary, Lufkin CCC Camp, Angelica Lumber Company and the Gann House but it may have been because we weren't looking in the correct location. So if anyone knowns where they are we'd love to hear from you. We hope to knock a few of the counties eastern markers that we simply did not get to in an upcoming trip in a few weeks.
28th November, 2018 - We take another trip back into East Texas but unfortunately did not get back into Angelina County. In East Texas there are a lot markers on back roads which can be pretty rough and slow going with a lot of back tracking so inevitably our trips here get replanned several times and some parts that we were hoping to cover fall off.
I do have a little more information on some of our missing Angelina County  markers again thanks to Bill Royce who patiently asked all my questions. Clark's Ferry will not be replaced because vandalism is too bad in this area. Angelina County Lumber Company on Old Mill Road was replaced. Don Joquin marker was going to be replaced though they have put a marker for Vicente Micheli at the same site so I wonder if this will still happen. Lufkin CCC Camp is back up. Southern Pine Commissary marker is in storage.
Angelina & Neches River Railroad
Angelina County
Angelina County Lumber Company
Berry Cemetery
Beulah Congregational Methodist Church
Beulah School
Birthplace of Allan Shivers
Blue Star Memorial Highway
Brown Cemetery
Burke Methodist Church
Burke School
Calder (Cotton) Square
Camp Nancy
Central Consolidated School
Cheeseland
City of Lufkin
Collins-Shotwell House
Diboll
Don Joaquin Crossing on Bedias Trail
Emporia
Emporia Cemetery
Equipment Typical of Early Texas Logging
Ewing
Fairview School
First Baptist Church of Diboll
First Baptist Church of Lufkin
First Christian Church of Lufkin
First Methodist Church of Diboll
First United Methodist Church of Lufkin
Gann Memorial Cemetery
German POWs in the East Texas Timber Industry
Gibbs House
Henry Harvard Home
Homer Cemetery
Hoshall
Huntington
Ivy Cemetery
Joseph Herrington
Kerr's Inc.
KRBA-AM Radio Station
Kurth Home
Lindsay Springs Logging Camp
Lufkin Daily News
Lufkin CCC Camp
Lufkin Foundry and Machine Company
Lufkin Telephone Exchange
Machinery from Early East Texas Logging Railroads
Manning
Mantooth Farm
Masonic Hall of Lufkin
McCarty Cemetery
Mount Calvary Baptist Church
Old Diboll Library
Original Site of St. Cyprian's Episcopal Church
Page Cemetery
Pine Grove Missionary Baptist Church
Pollok Baptist Church
Pollok Cemetery
Prairie Grove
Redland Baptist Church
Renfro Cemetery #1
Ryan Chapel
Site of Clark's Ferry and Clark's Ferry Cemetery
Site of Martin Wagon Company
Site of Rehearsal Hall for The Hoo Hoo Band
Site of the Town of Homer
Site of the Town of Jonesville
Site of the Town of Marion
Southern Pine Lumber Company Commissary
Southland Paper Mills, Inc.
Spirit of the American Doughboy
Stranger's Rest Cemetery
The Civilian Conservation Corps and Forestry in Texas
The Depot Explosion and Mystery
The Gann House
Thomas Lewis Latane Temple
​U. S. Forest Service in Texas
Vicente Micheli
​Walker Cemetery
W. C. Trout and the Counter-Balanced Pumping Unit
Whitehouse Cemetery