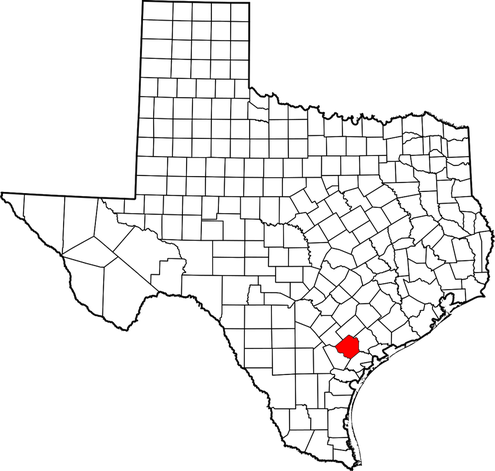 Named for Father Miguel Hidalgo, which is an anagram minus the H. County seat is Goliad. It is of course known for the Goliad massacre, Texas Revolutionary battle cry is "Remember the Alamo! Remember Goliad!". It is an old area of Texas with a rich history which includes Spanish missions, memorials and monuments dedicated fallen Texas heroes.
Most of the markers are in and around Goliad the markers entitled Site of September 1824 Indian Treaty, Site of Dobskyville and Mission Nuestra Senora del Rosario were missing. I'm not sure there are any plans to replace them. Lott Cemetery marker had yet to be dedicated and was still covered in cardboard (very annoying 😣 ). We took photos of the Ray Elijah House and W. J. "Ed" and Mary Elizabeth Lott House but did not get close enough to capture the marker (even more annoying 😤 ).  We did not locate the Geraldos B. Smart House. I also have some confusion about a centennial marker the Texas Historical Commission has listed as the Cart Wars but hope to get some clarity be contacting a friend who has photographed and cataloged all the Texas centennial markers.
If you get a chance to visit this area you should, the missions themselves are worth the visit.
December 4th, 2017 - Update there is no centennial called Cart Wars Marker so I have removed it from the list. I believe it may be a duplicate entry for another marker.
February 15th, 2020 - Goliad County has added a couple of new markers since we were last there, but other than that I have nothing new to report.